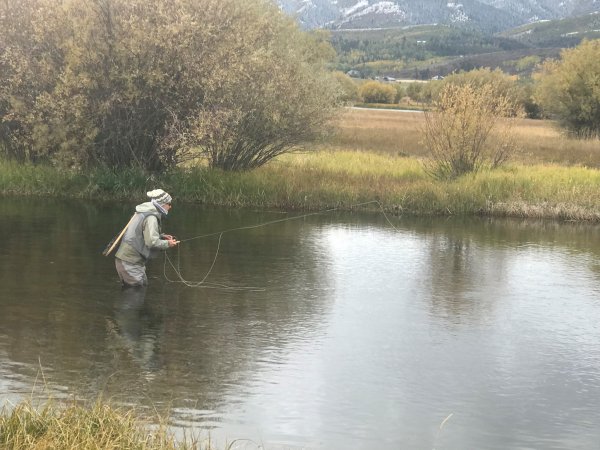 Had an opportunity to try some trout around Victor, Idaho with my good friend and fishing partner Dino Frangos. Located about 18 miles from Jackson Hole, Wyoming. Victor is a stones throw to numerous ponds, streams and rivers that get far less fishing pressure that some of the big boys in that area. With his “new” drift boat we took off to the Teton River. After surveying the water for inviting rises we rigged up with 5x tippet topped off with a blue winged olive and started the float. Each rise was an invitation to see who was home. We caught cut throat, white fish, a few rainbow and lots of brook trout. It was interesting that the brook trout almost always hit nymphs or wet flies when the other guys were picky to say the least even with the dries.

The following day we waded Fox creek, lots of brook trout with the same deal on wet flies and nymphs. That was the day we got in a snow storm on the river. Great to see tat take out through iced over foggy glasses and frozen hands, but the river was spectacular in the snow.

The biggest and best fish were caught on dries on the ponds around the golf course. I still believe that extra club in your golf bag should be a fly rod. That day it was true. These ponds were loaded with big, fat rainbows looking for something floating up top. In fact I had to step up to 3x to avoid losing of my fishing partners supply. Nothing more exciting than seeing that hit on top water. With the Teton mountains as a background, there is not a more picturesque spot in the west to enjoy the outdoors and there is no better way than standing in a trout stream swinging a rod. We were also treated to an entire moose family watching us drift by on the Teton.

It makes you appreciate the outdoors and the wildlife when you visit such a special place. The people all seem to be happy, the fish too. I just want to thank them for letting us net a few. 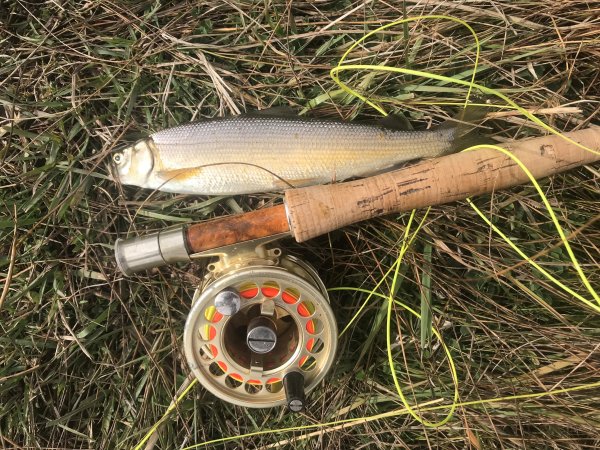 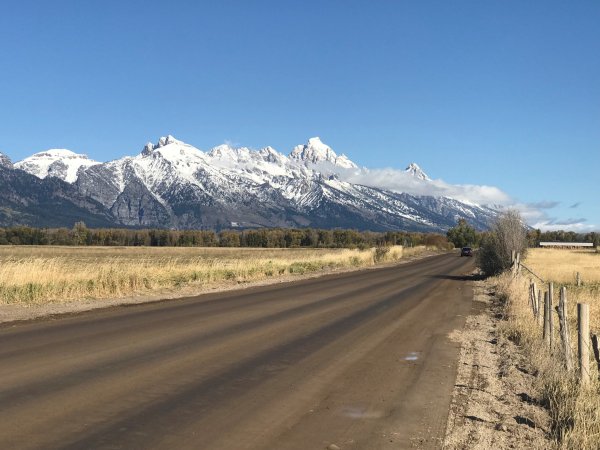 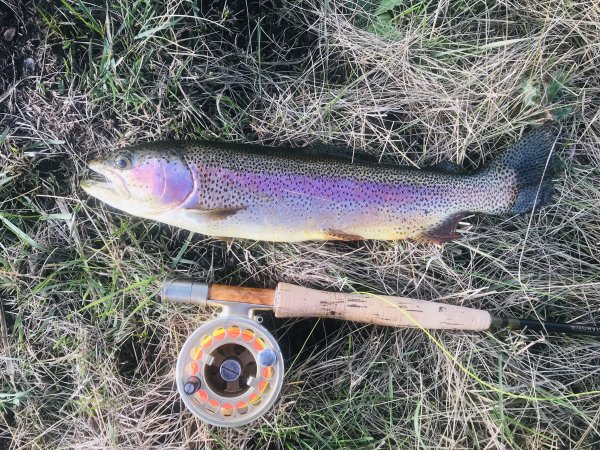 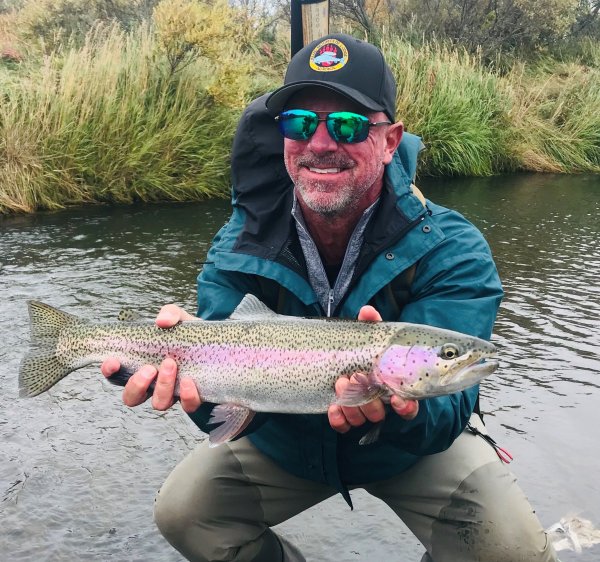 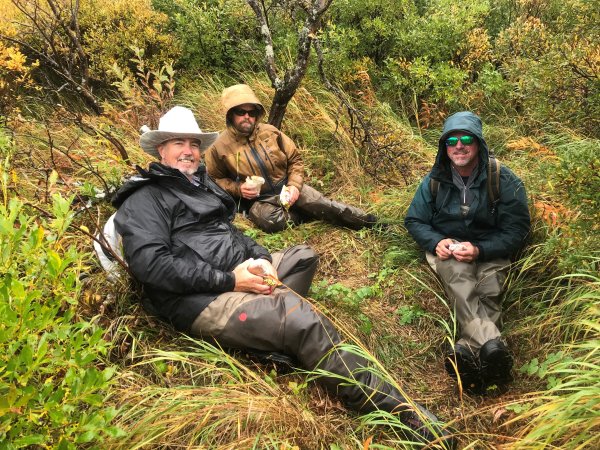 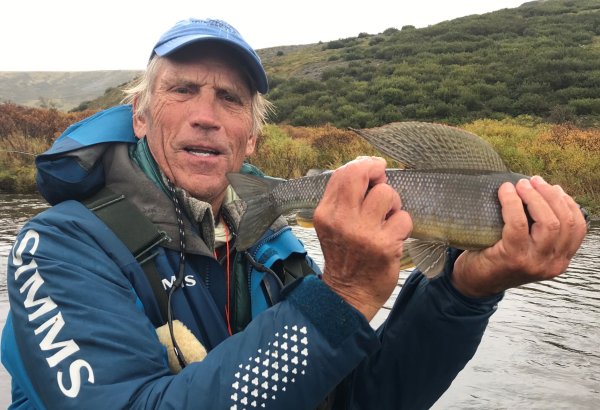 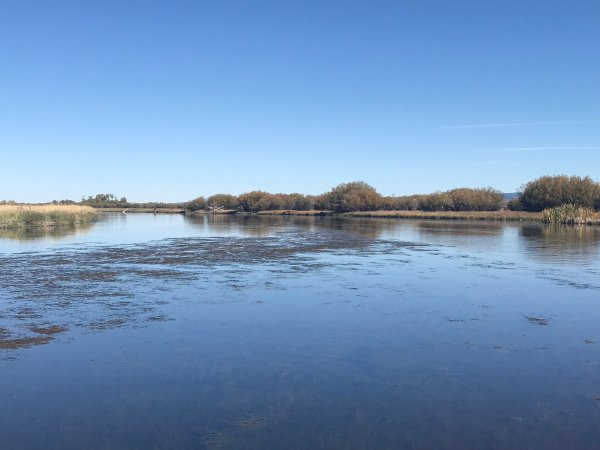 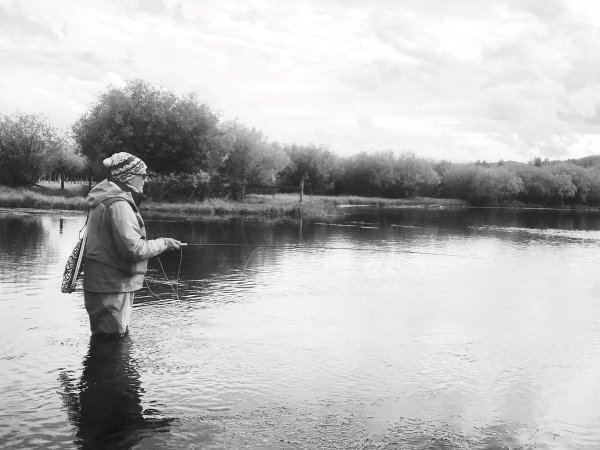 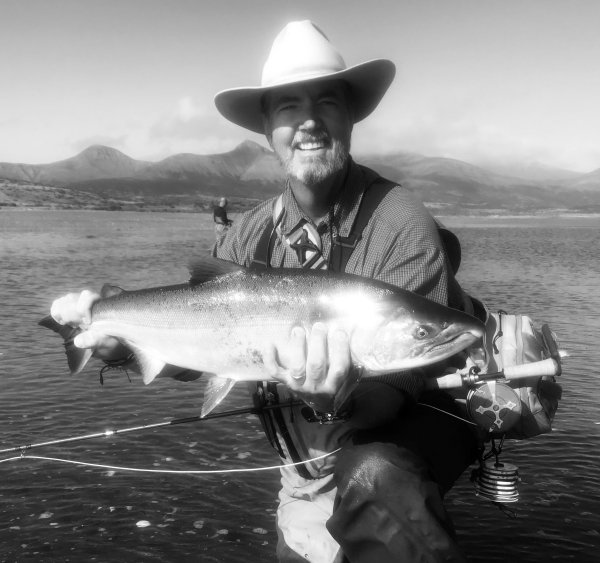 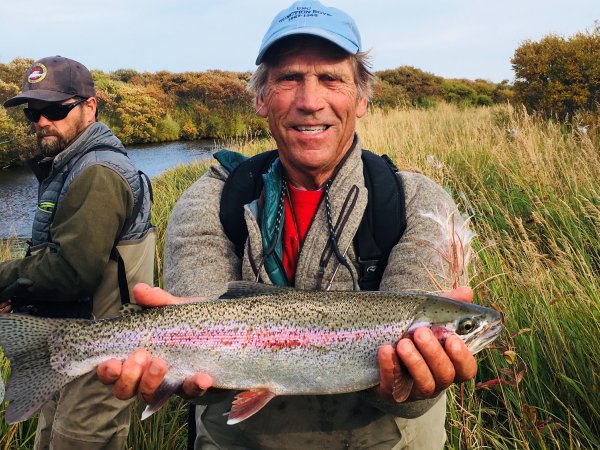 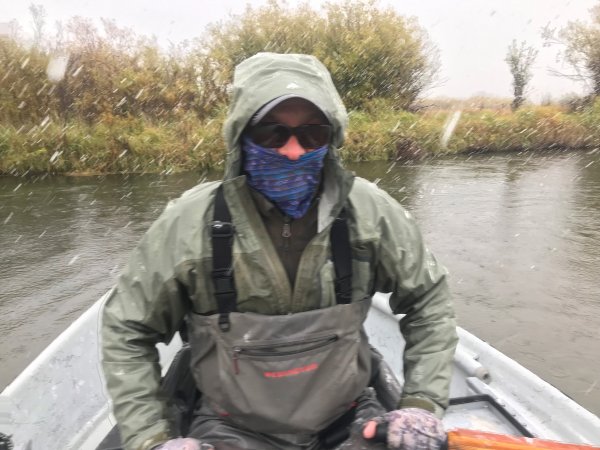 Alaska was the first trip I ever fished with a fly rod. What a journey it’s been. Now some thirty some years later, I still love fishing Alaska. This September marked twenty seven years since I first fished the Blue Mountain lodge on the Keani Peninsula about 300 miles from Anchorage. This place is the best fishing in all of Alaska by far. Tracy Vrem and his wife Linda began the lodge as a bear hunting operation that quickly expanded into a hunting and fishing service. What makes it so unique is that they only take 6 guest per week and Tracy, being a self described airplane junkie, has 4 planes at his disposal. This means you can go anywhere any time. There happened to be just 3 of us on this last week of the fishing season at the lodge which gave us the opportunity to explore some fishing areas that had seen little pressure this season.

Day one was silver salmon day. We flew to the coast, landed on the beach, and fished the small rivers dumping onto the ocean. The salmon move up the rivers to spawn and are hungry and eager to take a fly. They seemed to have a particular appetite for anything pink. This is a perfect setting to use a 2-handed rod. I always take one to Alaska. Ninety caught, give or take a few, a good days work.

The next day was not for the faint at heart.  After a short plane ride and a landing on an carefully chosen crest, followed by a 2 mile walk through willows 8 feet tall, swampy mud to your knees, over rocks and tundra, along bear trails all with waders and boots on to the “rainbow river“. Not more than 50 feet across at it’s widest part, this honey hole produced the biggest rainbows I’ve ever caught, and lots of them. I think the 3 of us caught maybe 50. These were beasts 22-26 inches all taken on top on mouse patterns. It was worth the walk especially when we hopped in the plane to go back to the lodge to hog down on a delicious supper that Linda had prepared.

Day three was Dolly Varden day on a still smaller river so shallow you wonder where the fish were hiding since you caught one on just about every drift. These Dollies were beautiful in their purple suits with pink spots, all dressed up for spawning. The trek wasn’t but a mile or so, duck soup.

Arctic Char came next on a swift river that emptied into a big lake. Glad I brought a wading staff. I remembered this place from a couple of years ago. It is strange that certain species live in certain rivers when all the water looks the same. These fish are spectacular with an orange belly that seems to light up the longer you stare at them.  Mixed in with the bows, dollies, and salmon were huge graylings, majestic with that huge dorsal fin.  They seemed to be in every river we fished and loved the top water flies.

The facility at the Blue Mountain Lodge has changed considerably from the first time I visited some 27 years ago. A new lodge, but the old weather station with bunks is now a spillover for an extra guide or helper. No more outdoor toilets marked with deer antlers or moose antler so we can be gender correct. Gone is the pipe to the lake for water but the big cooler of Tang is still present. I didn’t think you could even find Tang anymore. Before I ever visited Alaska, I wondered why people ooohed! and aaad! when speaking of living in Alaska or having visited there, all I can say after fishing there a dozen or more times, is aaaaaah! 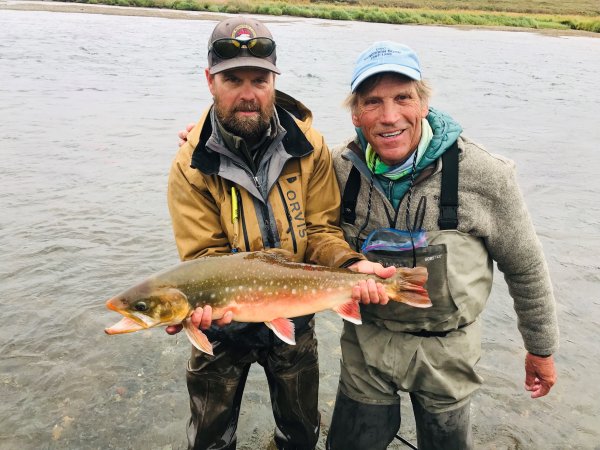 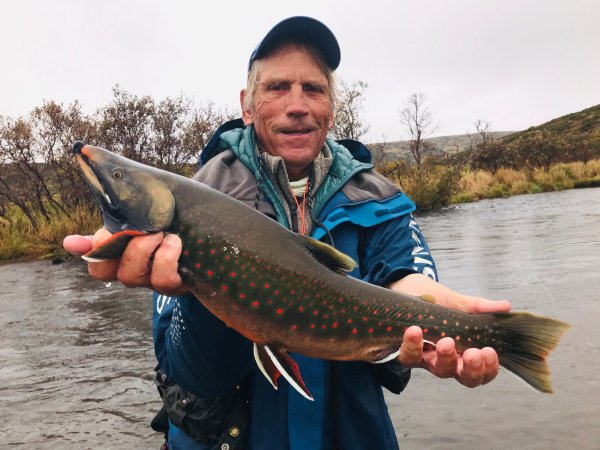 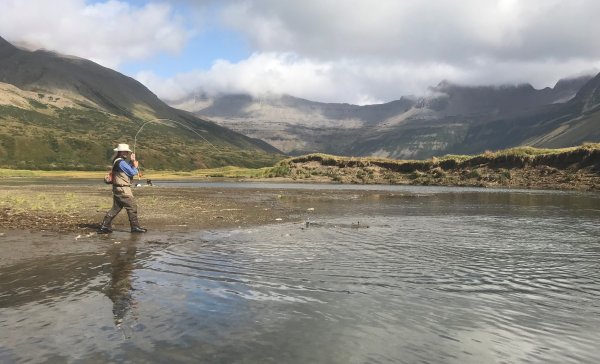 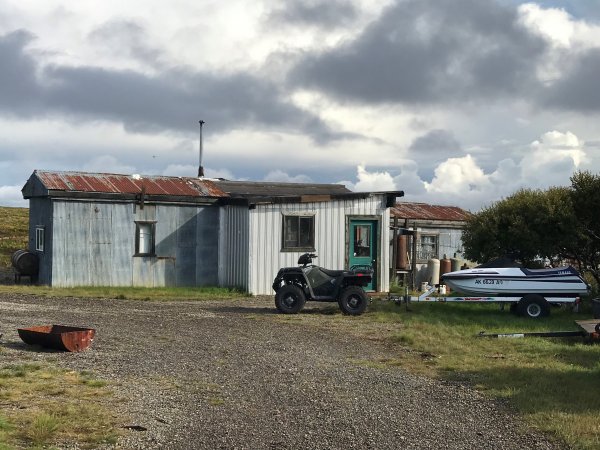 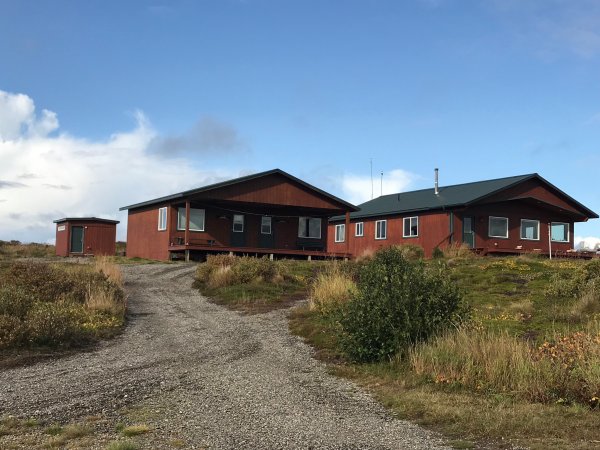 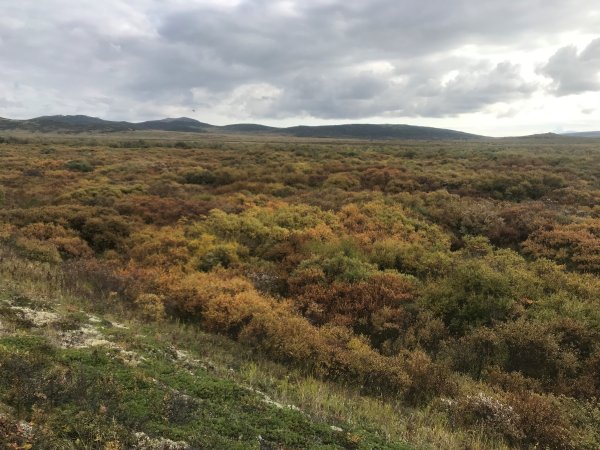 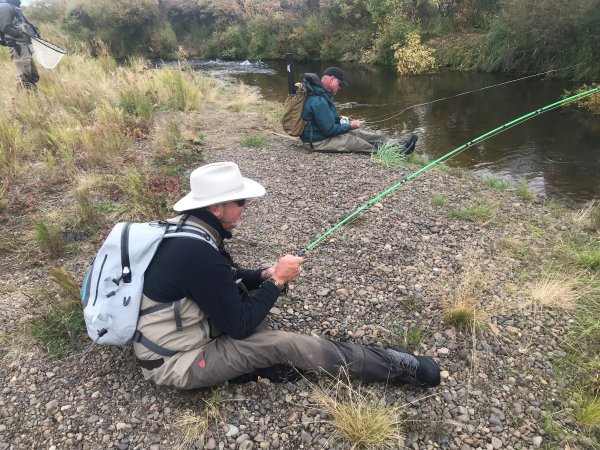 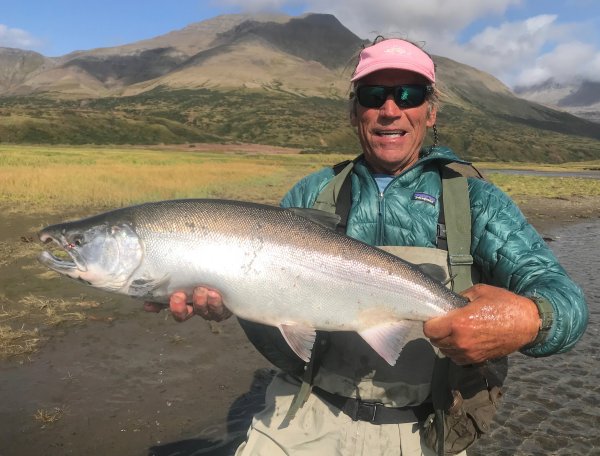