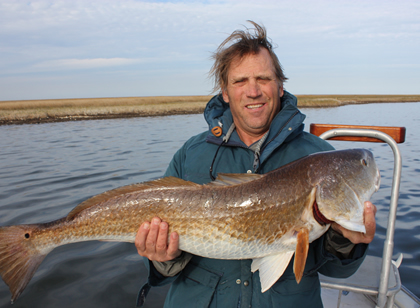 Pegged “The hardest fish I ever tried to catch on a fly,” by one of the world’s most successful tarpon fisherman, the redfish has taken its place at the top of the pyramid for fish sought out for site casting.
Chasing redfish in the marshes on the Gulf Coast is as challenging as fishing for bonefish in Mexico.

It is often been said that a redfish will eat any color as long as it’s gold. However, hardcore redfishermen agree it is not the color of the fly, but where the fly is delivered. Thus comes up the point of how to put the fly so the redfish will eat.

Let’s discuss flats boat fishing for the sake of technique and limit our discussion to fishing from the deck. This is the best way to cover lots of marsh.

First you have to have the right gun before you can pull the trigger. A 9-foot tip flex rod can cover the requirements for distance, speed, and accuracy. Although there are some very successful redfish anglers who throw an 8 ½ foot rod, the 9 foot in my opinion is more versatile.

If you are going to throw a rod all day it makes sense to use the lightest to get the job done. An 8 weight is up to the task and can easily handle a 40 pound red.

A floating line with some meat in the head for a quick delivery and taper toward the convex side to throw that monster fly. Some of the new lines by Rio and S.A. fill the bill perfectly. They are even labeled redfish lines. How about that? The S.A. Outbound is like a shooting head and is a good one for the reds.

Leaders need to be short, quick, and capable of turning over big flies. A 7 ½ foot tapered 20 pound mono is the leader of choice. Fluoro in my opinion is a waste of money. I personally like a 5 foot piece of straight 20 or 25 pound mono. Quick to turn over, cheap and no knots. What happened to the 60-20-20 rule?

Flies can go down or stay up. Look at a redfish’s face, he is always looking down. Flies that sink and end up in the feeding water column offer the best success. Walk on the wild side, poppers can pull that red off the bottom in a New York second.

One important issue regarding flies. I like a big hook with a wide gap and a needle point a.k.a. Owner or Gamakatsu 4/0. Why? The big hook for big fish lessens the chance of pull out. The wide gap is to get around the jaw bone.

The needle point for precise penetration is often overlooked. Hooks sharpened on three sides, cut on those three sides and that wallowing redfish can wallow that hook, cutting a hole allowing the unbutton experience. Colors? gold, gold and gaudy. Seriously, any color fly in the right spot works. Redfish will hit a beer can if it is in the strike zone. Remember, you cannot tie a fly so big a redfish cannot eat it. The bigger the better, providing you can cast it.

Where to Hunt
Redfish like a home where there are a few shells on the bottom and some sand or grass. Very seldom do they hangout on flats without some cover or camouflage. You know you are in redfish territory when you see their buddies, skates, rays and sheephead. They hang together.

Blowouts are redfish footprints, distinctive puffs of silt raised when the fish moves out. The redfish blowout is identified by a large burst of sand and silt followed by a smooth trail and a large ‘V’-shaped push in the water.
The skate and ray will also blowout, but the intermittent puffs created by the flapping of his wings serves to differentiate the ray blowout trail from the redfish. Good to remember this.

Now that you have an idea of what to use, how do you use it?

The saltwater quick cast was invented for the redfisherman. But the modern version of this cast is the reflex cast. No time to ponder loop formation, just put it on the fish. While you admire your false casting, that redfish is moving along. I’ve seen redfish blow off at 40 yards, spooked by the mear lifting of your arm. There are these distinct “lies” for shallow water redfish, the laid up fish, the tailers, and the cruising red. Each requires a different tactic.

The laid up fish can be the most difficult to catch. They sit and ponder often refusing presentations that literally roll off their nose. That being said, you must put the fly on his snout, twitch ever so slowly with a very short 2-3 inch strip. No take, repeat step 1 again and again. Don’t get wigged out if he moves on, he’s got other interest.
Tailers are what we read about and see in all the promo literature. These guys want to eat—so serve them up. Often in pods, pick off the guys on the periphery first and work towards the center. They are doing what redfish do, rooting and eating, and asking to be caught.

Cruising fish are the challenge. That is when the reflex cast comes out. The cruising fish is on a mission. An opportunistic feeder, he will go for the fly if it is put in his vision or strike zone. Remember, the redfish is looking down so a cast that gets in his grill is a temptation. This often means casting 10-15 feet in front of the fish letting it rest on the bottom until he gets there, then strip, bump, strip, bump in a 4-6 inch moves. Error on a cast farther ahead of the cruising fish. Short cast and you risk lining the fish. Redfish do not like line on their backs. Hit them in the head or tail but don’t line them. If you do, just let him swim out from under the line. Don’t tickle his back by stripping the line. Use the 10 foot rule. If you see a fish, cast and miss him and he disappears, he’s still moving. Cast 10 feet to each side of where you last saw him. There is a good chance he is close by.

Hooking the redfish requires some patience and technique. If the fish’s path crosses your fly, watch his head. When he turns on the fly let him have it. Many anglers jerk the rod up, out comes the fly. This bad boy requires a strip set. Tease him along with a short bump of 2 to 4 inches and when the fly disappears you know where it is. You have been waiting to set the hook, have at it. If he spits it ,the strip set provides you with a mulligan. He’ll often follow the fly all the way to the boat if you feed him correctly. What I am saying is if you don’t hook-up on the first strip, leave the fly in front of him and work it. Don’t recast unless the fish has moved away from the fly.

Set the hook and set it hard. He’s got a big hard mouth and a jawbone that requires that wide gap hook. The first run is often straight toward the boat. That is when most fish are lost for not setting the hook hard. In fact I tell my students to hit him hard at least there good times. No wimps here. Now  sit back and let him run. On the flats often there is no structure to cut you off so no matter how big he is, if you have a good hook set, you will probably land him.

Remember, be kind. Use a net or boga grip and send him back to mama.